Home Blog Employment law ﻿When It Comes to Non-Competes, Not All California Employees Are Created Equal

California is generally known as a “right-to-work” state due to its broad policy against restriction on trade, which is codified in the Business and Professions Code section 16600 et seq.  Subject to select exceptions that do not usually come up in the employment context, section 16600 reads: “every contract by which anyone is restrained from engaging in a lawful profession, trade, or business of any kind is to that extent void.”  This law gives California its fantastic reputation as a state that espouses lively market competition and a mobile work force available for hire at the drop of a hat.  California courts have long applied section 16600 to invalidate contract clauses seeking to prevent employees from working in their profession post-termination.

Does this mean you can peacefully make a transition to a competitor and ignore the draconian three-year post-termination non-compete clause?  Unfortunately for California employees the answer appears to depend on whether the employer is an out-of-state company and the contract has an out-of-state forum and choice of law selection clause.  Let’s get back to the hypothetical.  It was borrowed from the facts of a case decided in the United States District Court, Northern District of California earlier this year, entitled Meras Engineering, Inc. v CH20, Inc., No. C-11-0389 EMC (N.D. Cal. Jan. 14, 2013.)  In that case, CH20, a Washington corporation, employed several sales individuals in California.  The employees were residents of California, worked for CH20 almost exclusively in California and had no clients in Washington.  In addition to the non-compete provisions, CH20’s contracts contained a forum selection provision requiring that any disputes be litigated exclusively in Washington, applying Washington law.  In contrast to California, Washington allows non-competes as long as they are reasonable.

Right or wrong, where does this leave California employees working for out-of-state companies?  When interviewing for a job with a company based elsewhere, read your employment agreements carefully.  Be wary of clauses that dictate that disagreements must be litigated elsewhere and limit where you may or may not work after you leave employment.   If you are interviewing or thinking of leaving a foreign (non-California) employer, get legal advice before you act to prevent professional and legal hurdles down the line. 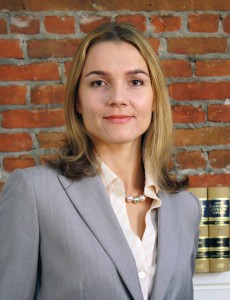 Veronika Short is an Employee Mobility Attorney and the founder of the Law Office of Veronika Short in San Jose.  She is originally from Russia but has lived in the Bay Area for over seventeen years. She studied philosophy at Santa Clara University and received her legal education at the University of San Francisco.

Veronika is an experienced trial attorney who has tried numerous cases to verdict in front of the judge and jury.  Veronika practices in the areas of trade secret law, contracts, employment and business litigation.  Her passion is to help professionals to transition freely between jobs or start their own business without running afoul of trade secret, duty of loyalty and confidentiality obligations.