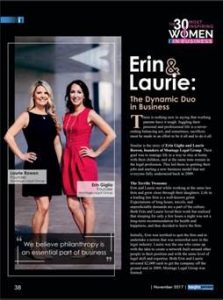 When we started Montage Legal Group almost 10 years ago, we were two attorney mothers with four toddlers and infants between us.  We were armed with a fairly simple idea to create a system connecting busy law firms with an untapped talent base – lawyer moms just like us. The only “inspiring” thing about Montage Legal’s business is that we saw a gap in the legal marketplace, and then we did our best to fill it.  We always try to run Montage Legal Group the right way – with kindness, and with generosity.

Doing the right thing is usually an easy decision, which is why we are always surprised to receive recognition like the 30 Most Inspiring Women by Insight Success.  We feel honored to be included, and will continue to strive to be as helpful as possible to lawyers everywhere.

We hope you enjoy our story!

There is nothing new in saying that working parents have it tough. Juggling their personal and professional life is a never-ending balancing act, and sometimes, sacrifices must be made in an effort to be it all and to do it all.

Similar is the story of Erin Giglia and Laurie Rowen, founders of Montage Legal Group. Their goal was to manage life in a way to stay at home with their children, and at the same time remain in the legal profession. This led them in quitting their jobs and starting a new business model that not everyone fully understood back in 2009.

Erin and Laurie met while working at the same law firm and grew close through their daughters. Life in a leading law firm is a well-known grind. Expectations of long hours, travels, and unpredictable demands are a part of the culture. Both Erin and Laurie loved their work but realized that sleeping for only a few hours a night was not a long-term recommendation for health and happiness, and thus decided to leave the firm.

Initially, Erin was terrified to quit the firm and to undertake a notion that was somewhat new in the legal industry. Laurie was the one who came up with the idea to create a network built around other people in their position and with the same level of legal skill and expertise. Both Erin and Laurie invested $2,000 each to get the company off the ground and in 2009, Montage Legal Group was formed.

“After having children, we were torn between staying on the law firm path and aspiring to join the partnership, or venturing out on our own, hoping to find ways to spend more time with our families while simultaneously advancing in our careers.”  They say that the risk alone was empowering. Montage Legal Group’s success has brought them both personal and professional satisfaction and they hope to create opportunities for others to achieve the elusive career/life balance that many people seek.

Erin and Laurie continuously decided to stay true to Montage’s original mission; which is to help busy law firms while providing freelance attorneys with career flexibility. While it was difficult to balance the freelance lawyers’ various needs, they made the decision to support them to the best of their abilities.

“When we close our eyes and imagine an empowered woman, many types of women come to mind. We imagine a woman who calls the shots in her own life. We see a corporate CEO who has made sacrifices to achieve success in business. We imagine a working mother balancing career and family. We also imagine an older women entering retirement who paved the way for women to hold equal positions in the workplace. Empowered women take many forms, and can be inspiring in their own individual ways.”

Providing a Sense of Control

Montage gives lawyers career flexibility so they no longer have to choose between a career and being a stay-at-home parent. Lawyers who previously left legal practice can re-launch their legal careers, which bring income into their families. Lawyers who wish to opt out of traditional firms can take a step back, without stepping out. Career flexibility through Montage reduces stress for freelance lawyers, creates room for more time with aging parents and families, and provides freelance attorneys with a sense of control over their lives. While Montage receives hundreds of resumes monthly, it accepts only a very small percentage of the best freelancers, keeping the network at around 200 freelancers from the best law schools and most prestigious law firms in the nation.

The Secret to their Success

Attributing their success to hard work, meticulous (yet flexible) procedures, and also to luck, Erin adds, “Timing has been on our side.  First, we were lucky that we were both pregnant with our daughters at the exact same time, which sparked the idea to leave traditional law firm practice to carve our own path.  We are also lucky to have stared our business during the 2009 Recession, when law firm layoffs were peaking.”  Big firm layoffs resulted in the emergence of thousands of small firms, but these Big Law firms still needed high-level help periodically. At the same time, many women lawyers who were previously elected to stay home with children needed extra income and wished to re-enter the workforce. Erin and Laurie consider themselves lucky to start their business when technology was advancing rapidly, making remote working possible and common. Finally, they were lucky to have started the business at a time when large law firms were putting pressure on lawyers to work grueling hours, and women lawyers – especially mothers – were increasingly leaving these firms in search of a way to practice law at a different pace. Montage filled all of these needs, at the right time.

Erin and Laurie’s leap of faith has resulted in making Montage a top brand that has been recently named as “Association of Fundraising Professional’s National Philanthropy Day Outstanding Small Business”. Today, Montage handles administrative and billing tasks, allowing its law firm clients and freelance lawyers to focus on legal projects.

Erin and Laurie aim to focus on keeping Montage as the nation strongest freelance attorney network and are encouraged by the amount of interest from both applicants seeking to join Montage and law firms seeking help on legal projects. Their only concern is that the business might grow too rapidly, and they might feel pulled too strongly away from their families. “We started this business to stay in the legal field while still maintaining happiness in our personal lives, and we would not want to lose sight of this,” asserts Erin and Laurie. 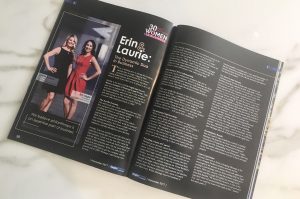