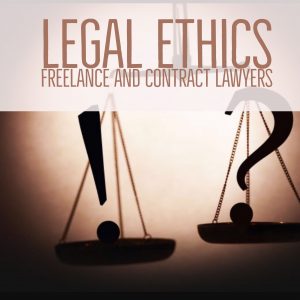 An article published in the American Lawyer on June 9, 2017, “Where Should Firms Draw Line on Contract Lawyers,” by Miriam Rozen (Am Law Daily) discusses the ethical issues that arise when a firm uses a freelance lawyer/contract lawyer to assist on a case. The article, which highlights Montage Legal Group and quotes Montage’s co-owner Erin Giglia extensively, specifically discusses freelance attorney rates, including whether a surcharge can be added to the rate when the client is billed, and whether the law firm’s client needs to be notified that they are using a freelance lawyer.

An excerpt from the article is below, but to read the full article, please click here.

Susman Godfrey has a policy when it comes to contract lawyers: The high-flying litigation firm discloses to clients exactly how much the temporary attorneys cost, and that’s exactly what the client pays.

In other words: No surcharge.

“We do a pure pass through,” said Erica Harris, Susman’s hiring partner and chairwoman of its employment committee.

In Texas, unlike in 48 other states, Susman and other law firms are bound by state bar ethical rules that forbid upcharging for contract attorney work.

The Houston-based firm applies the same standard in all its other offices as well—New York, Seattle and Los Angeles.

Many firms, however, not only harvest additional profits from contract attorney work, but also keep their own costs from the client, according to Erin F. Giglia, a lawyer and co-owner of Montage Legal Group, which represents a network of freelancing lawyers.

By using that strategy, those firms are not necessarily breaking any ethics rules or laws.

In all states but Texas and Maryland, firms are allowed to impose a surcharge for contract lawyers, Giglia said, unless the fees are unreasonable or a client specifically prohibits nondisclosure or additional costs in their retention agreement.

But to avoid future conflicts and misunderstanding, firms should—at minimum—disclose that contract lawyers have been hired, even though the ethics rules allow some wiggle room, said Giglia, whose network has about 100 lawyers.

“There is no rule that requires a law firm to disclose their profit margin on contract lawyers. In a lot of situations they are not required to disclose that they are working with contract attorneys at all,” Giglia said.

But if contract lawyers’ work on the case represents “a substantial development,” than ethics rules set by many state bars require disclosure, she said.

“There are many firms that like to use contract lawyers as a secret weapon,” Giglia said.

In an article about the ethics of using contract lawyers, Giglia noted that the American Bar Association has issued formal opinions that don’t stop the “secret weapon” approach. The ABA guidance generally allows for costs associated with legal services of a contract lawyer to be billed to clients as fees for legal services, as long as those fees are deemed reasonable.

For more information on the ethics of contract lawyers or using a freelance lawyer in general, please email [email protected]