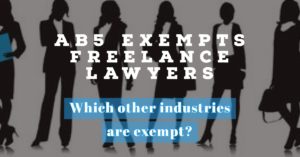 California Governor Gavin Newsom signed legislative Assembly Bill 5 (“AB5”) into law on September 18th, after much drama and contention between lawmakers and gig economy companies. After 18 months of uncertainty, California worker classification law is finally clear since the landmark Dynamex decision of April, 2018. The Dynamex case radically changed 30 years of worker classification law from the multi-factor test set forth in Borello, to the ABC Test, which essentially eliminated the independent contractor status for California workers. AB5 brought back the possibility of independent contractor status for some industries, including attorneys.

The Dynamex decision sent California employers into a panic, especially within the gig economy, which heavily relies on independent contractors.  The ABC test set forth in Dynamex signaled the probable demise of the gig economy, especially if the test expanded beyond the wage order, either judicially or legislatively.  The freelance attorney model was in serious trouble.  But we sat tight, and the Dynamex decision was later limited to the wage order in Garcia v. Border Transportation Group, LLC. The gig economy breathed a temporary sigh of relief.

This exodus of women, many of whom are graduates from the country’s most prestigious law schools, has resulted in the birth of companies that connect them with law firms seeking top notch attorneys.  These platforms, such as Montage Legal Group, have been thriving.  Montage currently has approximately 350 attorneys participating in its platform, about 85% of whom are women, and a growing client roster of law firm clients. In short, the freelance attorney model is a game changer for some of the country’s elite legal talent, as more attorneys and law firms realize the cost and lifestyle benefits of the freelance relationship.  Many freelance attorneys feared that they may be forced to join law firms again, or quit law entirely, depending on their circumstances. Neither was an attractive option. Law firms similarly feared they would lose access to true freelance attorneys who provide intermittent assistance, and have been an important resource.

“The Dynamex decision is intended to shield California workers from misclassification as independent contractors, which provides fewer legal protections for workers than employee status. Worker protection is an important goal, but blanket application to all workers goes far beyond protection and creates unintended negative consequences for some workers, businesses, and consumers. Certain industries, including licensed professionals and independent business owners, do not logically fall under blanket employee classification. Under the ABC Test, an attorney assisting a law firm with legal projects would be classified as an employee, regardless of how tenuous or infrequent the relationship between the contract attorney and the law firm.”

AB5 – Hero for Some, Villain for Others

Thankfully for some, in late 2018, Assembly Member Gonzales introduced legislation to clarify and codify the Dynamex decision.  The bill is intended to “codify the decision in the Dynamex case and clarify its application,” and expands the Dynamex decision beyond the wage order to include the Labor Code and other provisions. AB5 has not been without drama. The California Senate placed the Bill in the suspense file when it lacked agreement on exempted professionals. Not surprisingly, gig companies like Uber, Lyft, and DoorDash unsuccessfully pushed for exemption. But the Bill made it out of the suspense file, and it went to a full vote on September 11th, passing 56-15. Governor Gavin Newsom signed the bill on September 18, 2019.

Which Industries are Exempt?

AB5 limits the ABC test to a certain extent and provides an exempted list of workers who are not affected by its reach. This list includes:

There are also several additional classifications of exemptions that carry certain conditions. For example:

We Are Not Lawless! Borello Still Applies

The Borello “multi-factor” or “economic realities test” has remained unchanged since 1989, but law firms and freelance attorneys should be vigilant in light of increased worker misclassification scrutiny.

In light of these factors, there are considerations that businesses and freelance professionals should recognize to ensure that they remain contractors:

Freelance legal platforms – where freelance attorneys set their own rates, supply their own office equipment, and decline work at will – provide the safest bet. Law firms procuring freelance attorney assistance directly need to exercise caution, and keep the Borello factors in mind. The very thing that attracts attorneys to freelance work – autonomy – is the key to ensuring the industry’s survival.

AB5 is the law for worker classification in California, although there may be additional industries exempted by future legislative amendments. Thanks to AB5, legal freelancing, and other high-level professional freelancing, remains an option. Other industries will need to adjust, or may cease to exist. As for Montage, freelance attorneys are grateful for the ability to continue handling flexible legal consulting projects, and law firms will continue benefiting from an important resource.