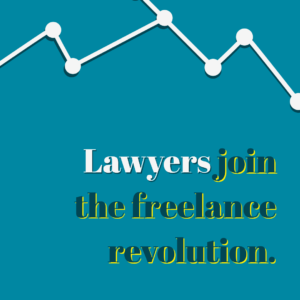 A recent Forbes article by Jon Younger highlights what he calls the “freelance revolution” and cites Montage Legal Group as a freelance legal talent platform that has emerged and flourished.  The article focuses on the legal industry as yet another profession “aligning itself with the freelancer option.”  He quotes Georgetown University’s recent study, which explains that “the traditional law firm model, which has served firms well for decades, is now largely broken apart because of new market realities,” and states that “the legal industry has become more accommodating to flexible work arrangements in corporate law. Enabled by advances in technology, some matters can be handled as effectively at home as in an office.”

Alternative legal practice, including legal technology companies and freelance platforms, have certainly been in the news lately.  Axiom, one of the most well-known legal talent platforms, recently acquired Bliss Lawyers, and continues to grow.  Other platforms, however, have collapsed despite major venture capital funding.  Atrium, a hybrid legal software and law firm startup that received $75.5 million in funding, laid off 100 employees and shut the doors this week, allowing just a standalone law firm to continue.  See $75M legal startup Atrium shuts down, lays off 100  (“Justin Kan’s hybrid legal software and law firm startup Atrium is shutting down today after failing to figure out how to deliver better efficiency than a traditional law firm.”) Upcounsel, an online lawyer marketplace that works for law firms and direct clients (which has raised a total of $26 million, including a $12 million Series B in April 2018), notified customers in February that it will shut down permanently on March 4.  Since then, it has flip-flopped, and stated that it may remain open, but time will tell if this company will survive.

Younger’s Forbes article mentioned various freelance legal platforms including Axiom and Montage Legal Group, and discusses a new company called InCloudCounsel, a legal technology company that pairs its virtual network of corporate lawyers with its AI-backed tech platform to handle routine legal work for large enterprises.  While InCloudCounsel appears to use the same type of talent as both Axiom and Montage Legal Group, i.e. graduates from top law schools who previously practiced in BigLaw, InCloudCounsel appears to work for companies that need large-scale document reviews and technology to automate routine legal services.  Will this new company become the “largest global provider focused on automating and enhancing high-volume legal processes” as the article states, replacing recently collapsed companies? Maybe! This begs the question: Why do some “freelance lawyer” companies succeed and some collapse?

First, we need to answer: What exactly is a freelance lawyer?

Freelancing in non-legal industries is defined as “a person who works as a writer, designer, performer, or the like, selling work or services by the hour, day, job, etc., rather than working on a regular salary basis for one employer.”   In law, however, it’s a bit different.  A solo practitioner is a lawyer who works on her own, and is not a member of a law firm.  Solo practitioners own their own law firms, and work for large and small clients who need legal services.  Because the term solo practitioner already exists, the term “freelance lawyer” does not mean an independent lawyer working for her own clients as one might expect.

The term “freelance lawyer” simply means a lawyer who works for lawyers.  We utilize the term “freelance lawyer” to distinguish ourselves from the term “contract lawyer,” which tends to have a negative connotation, and to distinguish ourselves from solo practitioners who work for clients rather than for law firms. We have the media’s support.  Indeed, Montage is credited with coining this term 9 years ago in a 2011 ABA Journal article (“Laurie Rowen and Erin Giglia would like to add a new work status to the law dictionary: freelance.”) and credited in a 2018 Above the Law article as starting the freelance lawyer movement (“Montage Legal, founded in 2009, roughly marks the start of what I call FreelanceLawyer 2.0”).

The term “freelance lawyer” is essentially an elevated contract lawyer, and refers to a lawyer who works for another lawyer.  Freelance attorney platforms cannot directly represent clients because freelance attorney platforms are not set up as law firms, and different ethical and professional rules apply.  Montage is not organized as a law firm or a staffing company, and pursuant to California and ABA ethical rules, Montage Legal works only for other attorneys — not individuals, or independent businesses that don’t have established in-house legal departments.

Still confused? It’s hard not to be! Many “freelance attorney” companies hire the same types of former BigLaw lawyers, but the distinguishing factor is the ultimate client: Is the client a lawyer or is it a company? A company handling legal client representation may not be truly utilizing “freelance lawyers” as we define the term, regardless of whether they call themselves Legal Process Outsourcers (LPO), Alternative Legal Service Providers (ALSP), virtual law firms, freelance platforms, or any other new title.

While we wish we knew why some companies succeed and some fail, we know we agree with Jon Younger that law has certainly “joined the freelance revolution.”  Despite company closures and some uncertainty with respect to legal tech freelance platforms, legal tech in general is thriving, especially female-founded legal tech companies.  Theory and Principle, Hello Divorce, Paladin, and Documate are a few examples of legal tech companies committed to increasing access to justice and improving the legal industry.  These successful legal tech companies show that anything is possible!