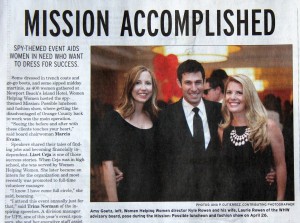 WHW celebrated with its supporters and introduced new friends to the mission of empowering employment success at its annual gala, Mission Possible.  On April 26th, hundreds of people joined together at Newport Beach’s Island Hotel for WHW’s spy-themed Mission Possible Luncheon and Fashion Show, making the event a huge success.  Montage Legal Group is honored to have been a sponsor of the event, which raised over $116,000 toward their Employment Success Programs.

On May 6, 2014, the OC Register featured an article titled “Mission Accomplished” highlighting the event, and including a photo of Amy Goetz (corporate legal counsel at Applied Medical), Kyle Rowen (WHW director and Wesierski & Zurek lawyer) and Laurie Rowen (co-owner/founder of Montage and WHW Advisory Board Chair).  The article quotes Laurie Rowen as follows:

‘I’ve been so impressed with the growth of the organization,’ said Laurie Rowen, founder/owner of Montage Legal Group and WHW advisory board member.  ‘There’s a wide range of people in the community, young and old, who come together and get involved.’

The Critical Mass Radio Show was also at WHW’s Mission Possible event, and featured an interview with WHW’s CEO, Janie Wolicki, as well as several WHW board members.  Ric Franzi interviewed Laurie Rowen, who discussed her long-time involvement with WHW and how WHW has helped hundreds of men and women obtain jobs, especially during the recession.  To listen to the radio show, please visit: Critical Mass Radio – Interviews with WHW or click on the link below.

To read the full article in the OC Register, see “Mission Accomplished: Spy-Themed Event Aids Women in Need Who Want to Dress for Success” OC Register, (May 6, 2014).

Montage Legal Group will be organizing a community clothing drive for WHW called Suits for a Cause, which brings together the legal industry and for the first time, the financial services industry.  Stay tuned for more information about Suits for a Cause – 2014!