One our favorite community service activities is speaking with law students about the ins and outs of the legal industry.  Because law school and even legal practice can only take you so far, we try to fill in some gaps in between being a good lawyer and having a successful practice.  While we are not experts, we have definitely learned a lot in our own entrepreneurship journey, and are always happy to pass along lessons learned to law students starting their journey to legal practice.  Occasionally, we meet a student who takes the initiative to write an article for our blog.  We are so impressed, and expect to see excellent things in the future from these terrific students! We are happy to feature law student Steve Bell’s article about the 4th Amendment here on our blog.

On June 25, 2014, in arguably its most far-reaching criminal law decision since 1966’s Miranda v. Arizona, the U.S. Supreme Court held 9-0 that, absent exigent circumstances, police must obtain a warrant before searching the contents of a cellphone.

One such exception is a police search, incident to a lawful arrest, of the arrestee’s person and the area under his/her immediate control, typically including purses, wallets, briefcases, etc. As the Court set forth in Chimel v. California and U.S. v. Robinson, such a warrantless search incident to arrest is a reasonable exception to the warrant requirement given society’s interest in the safety of the arresting officer and the preservation of evidence that might otherwise be destroyed.

The question before the Court in Riley was whether cellphones raised significantly different privacy concerns from those things which police historically have been allowed to search incident to arrest without a warrant. The government argued that there was no difference, that cellphones are just like anything else carried on the person, and that “[e]vidence of crime should not be insulated . . . [simply] because the arrestee maintains it in a technologically sophisticated [digital] form.”

The Court unanimously disagreed. As Chief Justice Roberts initially noted, cellphones are “now such a pervasive and insistent part of daily life that the proverbial visitor from Mars might conclude they were an important feature of human anatomy.”

The decision examined how cellphones differ from briefcases or purses, noting their “immense storage capacity” and their ability to function variously as “cameras, video players, rolodexes, calendars, tape recorders, libraries, diaries, albums, televisions, maps, or newspapers.” Collectively, such functionality and storage capacity makes a cellphone the equivalent of a small computer and suggests that searching an arrestee’s phone potentially could produce more private information than searching his/her home.

Further, the Court found that because cellphones are able to access personal information stored within the internet “cloud,” which is not even arguably “on the arrestee’s person,” a cellphone search easily could exceed the allowable scope of a warrantless search incident to arrest. In addition, the Court noted that the two traditional justifications for such a warrantless search – officer safety and evidence preservation – were not factors when searching digital data.

As the Chief Justice summarized: “Our answer to the question of what police must do before searching a cellphone seized incident to an arrest is accordingly simple – get a warrant.” 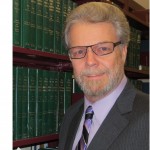 Steve Bell is a third-year law student at Western State College of Law in Fullerton focusing on litigation with a special emphasis in criminal defense. He is Managing Editor of the Western State Law Review, President of the Criminal Law Association, and a member of the Mock Trial team. His professional memberships include the O.C. Trial Lawyers Association, O.C. Criminal Defense Bar Association, and the Hon. Joseph B. Campbell American Inn of Court. Steve has been a featured speaker on prison conditions and prisoner’s rights at U.C.I. and U.C.L.A.