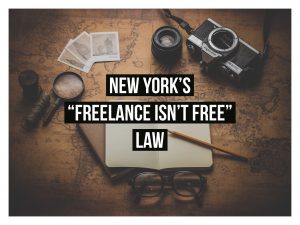 The so-called “freelance economy” – or “gig economy,” if you please – appears to be here to stay, with no signs of slowing growth. As of 2016, approximately 34% of the U.S. workforce worked as freelancers, and that number is expected to reach 43% by 2020. There are upsides and downsides to workers and employers alike for freelancing. One of the key benefits of freelancing that we see constantly at Montage Legal is the freedom that freelancing provides attorneys in being able to use their professional skills to earn income on their own terms without the commitment and unwanted stresses of a full-time attorney position.

But a chief complaint that freelancers in certain lower paying industries often have is the difficulty in getting paid for their services and in establishing clear parameters for the work to be done, especially when the leverage is often on the side of the employer. The law is finally beginning to catch up in giving freelancers clear legal rights in contracting for and getting paid for freelance work, with New York City’s “Freelance Isn’t Free” Law (the “Freelance Law”), signed into law by Mayor Bill de Blasio in May 2017, providing a compelling step forward for freelance worker rights.

What Freelancers Are Covered By the NYC Freelance Law? (Hint: Not Lawyers)

Before we get too far in explaining the protections and obligations provided by the Freelance Law, it should be stated at the outset that attorneys doing legal work are not covered as freelance workers under the law (certain sales representatives and licensed medical professionals are also excluded from the definition of freelance workers under the law, as well as work done pursuant to a valid collective bargaining agreement).

Why attorneys are not covered by the law is probably the subject for another blog, but there are a couple of likely reasons for the exclusion, such as the fact that legal services are often indefinite in their scope (as opposed to, say, web design) and that attorneys are in a better position than most to create contracts for their work and take action to enforce those agreements.

Which brings us to the question of who exactly is covered by the law. On the freelancer side, the answer is pretty much anyone else who is a NYC-based freelancer working as an independent contractor for an employer and earning $800 or more within a 120-day period from that employer.

On the employer side, the law certainly covers employers (which can be businesses or individual consumers of freelance services) who are based in NYC as well as those who do significant business in the city. As for those employers outside of NYC who contract with NYC-based freelancers, it is unclear whether a judge would impose the requirements of the law on a non-NYC employer, and a court would likely look at the connections between that employer and NYC to determine whether the freelance law applies to a transaction with the freelancer.

An Employer’s Contract Obligations Under the NYC Freelance Law

Moving on to what is required under the law for those employers who do transact with covered freelancers, there are two main aspects of the Freelance Law: 1) a requirement that a written contract with specific terms be put in place; and 2) the remedies freelancers have against employers who either fail to have a valid freelance agreement in place; fail to abide by the terms of the agreement and/or the Freelance Law; and/or retaliate against a freelancer for pursuing his or her rights under the law.

For all contracts entered into on or after May 15, 2017 with a covered freelance worker for $800 or more (or for multiple contracts with the same employee that total $800 or more over a 120-day period), there must be a written agreement in place, with copies provided to both the employer and the freelancer, which includes the following:

A Freelancer’s Remedies Pursuant to the NYC Freelance Law

If the employer fails to make sure there is a written contract in place detailing these terms, the freelance worker can file a complaint with the Office of Labor Policy & Standards, or proceed directly to court to file a claim against the employer for $250 per violation, even if the worker was paid for the work.

If the freelance worker is not paid on time pursuant to the contract, that worker can also file a claim for double the damages owed under the contract, as well as injunctive relief and other forms of relief. When the contract specifies no date of payment (or there is no contract), the freelancer can pursue the same relief in court if not paid within 30 days of completion of the work.

Notably, if an employer attempts to retaliate against a freelancer for pursuing any rights under the Freelance Law, the freelancer can pursue additional monetary damages under the law. Furthermore, those employers that engage in a pattern of violations of the Freelance Law could be subject to a civil fine of up to $25,000, payable to the city.

While the NYC Freelance Law is a positive sign for increased protections for freelancers in our evolving economy, it is obviously limited in scope as it applies only to freelancers based in New York and specifically excludes attorneys.

At Montage Legal, we have championed freelance attorneys since our founding in 2009 by matching elite legal talent with law firms, attorneys, companies, and other entities in need of legal assistance. We promote and ensure fairness for clients and attorney freelancers alike, all in pursuit of creating excellent work product and mutually beneficial relationships.

Jeremy received his Juris Doctor from the New York University School of Law in 2006, which he attended on a Dean’s Scholarship, and served as an editor on the NYU Journal of Law and Business.  Following law school, Jeremy joined the New York office of WilmerHale in 2006, working in the firm’s highly regarded Securities department. Jeremy worked in both the NYC and Los Angeles offices of the firm, where he had a central role in numerous high-profile investigations relating to securities/financial fraud, corruption, insurance fraud, and other white collar matters.

Jeremy left WilmerHale in 2011 to earn an MFA in writing from the School of Cinematic Arts at the University of Southern California, which he attended on an Annenberg Fellowship, the only member of his incoming class to receive the honor. Since graduating from USC, Jeremy has written extensively for law firms, attorneys, and legal tech companies – primarily focusing on regular blogging and website content related to practice areas and developments in the law – authoring thousands of articles and marketing materials to help attorneys gain market share and increase business. Jeremy has also authored hundreds of original bar exam essays, performance tests, and MBE questions for Kaplan Bar Exam, and has individually tutored over 100 students in bar exam essay and performance test writing.