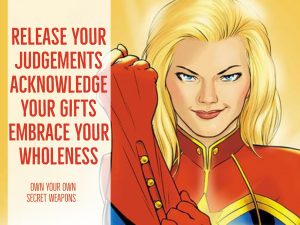 While I am not a lawyer myself, I work with a lot of lawyers. Lawyers are among the brightest, most educated, talented people around, and yet, they often feel the most stuck. I work with lawyers to help them get out of their own heads, to discover their strengths, and use them to set and meet goals. Lawyers are superheroes, secret agents, and scholars all rolled into one. What are your super powers, and more importantly, are you using them?

Watching Linda Carter fly her invisible jet while watching Wonder Woman on TV as a kid, I was mesmerized. The idea of an aircraft that was truly invisible was amazing, of course jets, in general, were just cool. I wanted to see what this powerful woman would do next.

Wonder Woman, and many others, had plenty of secret weapons. James Bond had any number of high-tech gadgets. Superheroes had abilities and toys of which the villains were unaware, and that helped our heroes always win.

While you may not have the gadgets or abilities of your heroes, it is likely you do have a veritable arsenal of secret weapons at the ready to help you achieve your goals, and of which you aren’t aware. Worse yet, you might be aware that you have them but don’t correctly identify them as secret weapons, and are actually judging and rejecting them.

How To Tell If You’re In Judgment

Anytime you’re making something (or someone) “wrong,” you are in judgment. And there are two words that are GREAT indicators of said: “should” and “shouldn’t.”

Whenever you think or suggest that something shouldn’t be as it is, you’re in judgment. It’s what I call “shoulding” all over the place. And when you’re “shoulding” on something (or someone – including yourself), you’re judging it and disconnecting yourself from it.

This defensive posture is designed to protect you from the uncomfortable feeling and upset surrounding the thing you are judging. But what if you’re wrong and that thing that you think is “bad” is actually one of your secret weapons?

How can this be? In Hamlet, Act 2 Scene 2, Shakespeare wrote, “for there is nothing either good or bad, but thinking makes it so.” (I know. I just connected comic books to Shakespeare. Don’t judge me.)

And Shakespeare was right. Things aren’t good nor bad. Things simply are. You decide if they’re good or bad based on whether or not you like it. So what if the very thing that you are holding in judgment as “bad” is actually one of your secret weapons? Let’s find out…

Physical traits are easy to start with. For me, at 5’6′′ and a pasty-white redhead, I couldn’t define myself as “tall, dark, and handsome.” I used to see this as a “bad” thing and I judged this so harshly that I actually created the meaning that because I wasn’t tall enough, I was actually less of a man. Ouch. (I’m sure some women can identify with this. Maybe you don’t look like a supermodel, so don’t feel attractive? Are you too “cute” to be smart? Too quiet to be viewed as credible?)

So, assuming that my stature is a good thing, what might be a way that is so?

You may not notice me walk into a room, and sometimes it’s an advantage when people don’t see me coming (I’m a ninja!). I was always shorter than my peers, so early on I learned to compensate for this by cultivating a huge personality, which now, as a motivational speaker, gives me great (and necessary) stage presence even though I’m naturally rather shy. And I’m generally pretty comfortable on a five-hour flight in coach.

Maybe you’ve been down-playing your physical attributes because you want other lawyers to take you seriously. But perhaps if you looked like you just stepped out of the pages of magazine, opposing counsel won’t be as prepared when you smack him with a legal brief that destroys his case against your client. (A different kind of ninja!)

Maybe you’re tall but avoid wearing heels because you don’t want to be “too tall” or intimidating. If people really are “intimidated” by your height, then it is probably a good filtering tool, and may actually give you the advantage.

Maybe you have a petite frame and now notice that your Mini Cooper is the perfect car as you can find parking a lot faster than everyone else driving SUVs and you never have to be the carpool driver as there isn’t enough room in that thing, saving you a ton of time!

Let’s take dyslexia. You might judge that as a bad thing. But if you’ve done the research, you know that a dyslexic brain works differently than an average one. They think in images and are gifted in the area of visual spatial intelligence. Hmmm… Sounds like a secret weapon!

In 1978, “Diamond” David Lee Roth, original front man for the legendary rock band Van Halen, gave an interview where he explained that at eight years old, his doctors at the time said he was, “hyperactive.” But instead of labeling David with a “problem,” his family called his hyperactivity, “monkey hour.” In doing so, David discovered and learned to use his secret weapon, saying in the interview that he was able to turn “monkey hour” into a successful career. (See the interview here with the referenced part at 50 seconds in.)

Had David and his family tried to reject this aspect of his being, it is very likely we would not have what is now one of the greatest Classic Rock bands of all time.

The instant you release the judgment around these things, you embrace your wholeness and empower yourself to take hold of more of your secret weapons, and to better (and more authentically) equip yourself to achieve your goals.

Release your judgments. Acknowledge your gifts. Embrace your wholeness. Win.

It’s your kingdom. Make it REIGNTM. 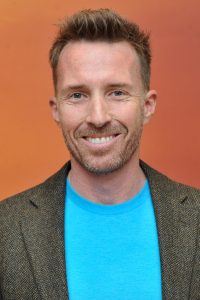 Chris M. King helps professionals remove the the barriers to success. By aligning their mental framework with their thoughts, feelings, and actions, Chris ensures executives and teams achieve their intended results.

Executives, professionals, and organizational teams experience improvements in performance and efficiency of up to 40%, relief from feeling “stuck,” freedom from overwhelm and burnout, improvements in communication and accountability, innovative solutions, and clarity with regard to plans and next steps.