Sheryl Sandberg now famously describes a woman’s career path as a jungle gym rather than a ladder in her controversial book “Lean In.” Women often start on a certain career path, then want or need to shift their careers for many different reasons. For female lawyers, the big law firm partnership track can work well for some, but others choose to step out of the law firm setting in favor of an alternative, flexible arrangement. Leaving a career can be a difficult choice for many educated and accomplished women, and many prefer to make adjustments to stay in their careers rather than opting out entirely.

A freelance legal practice can be a solution for many of the attorneys stepping out of the law firm setting, sometimes temporarily. Freelance lawyers make their own schedules, which opens room for family or other career or personal interests. Freelance attorneys in the Montage Legal Group network have joined for many reasons – mothers and fathers join the network to find more balance between their personal and professional life, solo practitioners join to increase their work volume while starting out new practices, and others are focusing on a non-legal career but want to keep a hand in legal work.

Montage Legal Group has been a safety net for some, and a stepping stone for others. Since Montage Legal Group started, we have had several talented lawyers leave our network to opt back in to more traditional careers in-house for companies, to start their own solo practices, or to return to the law firm model. Montage Legal Group assists many attorneys through career transitions, which has always been our intent. We hope that if and when a freelance attorney wants to return to full-time practice, we can help them find the best next step, and are happy to say goodbye and good luck when the time is right for them.

Montage Legal Group features lawyers who have made the decision to move on from the Montage freelance work on the Montage Alumni page, and we are proud to say, this list is growing long with our Alumni’s impressive accomplishments!  Dimetria Jackson left Montage Legal Group and joined Golden State Foods, Kim Bick went to Irell & Manella, and Kim Murakawa joined British Petroleum. We recently said goodbye to Sara Mostafa-Ray and Shawna McKee, who left freelance law because it was the right time in their lives to go back to law firms.  We hope their stories below inspire you to seek out the career that works for you, and not be afraid to make a change when the time is right.

Sara Mostafa told her story to the Riverside Lawyer, which recently published her article “My Journey to Freelance Practice.”  In her article, Sara talks about graduating from UCLA Law and starting at a large law firm in San Diego (Cooley, LLP). Sara then moved to Hawaii for family reasons, took the Hawaii Bar, and practiced immigration law in Hawaii for several years before moving back to San Diego. When Sara returned to San Diego with two very small children in tow, she decided to try a flexible freelance practice, and became a freelance lawyer with Montage Legal Group. Sara states:

Over the course of the year and a half I worked with Montage, I performed freelance projects for several firms and was able to stay sufficiently busy to support a reasonable lifestyle for myself and my family. I didn’t have it all, but I did have everything I needed. While the lavish existence I enjoyed as a Biglaw attorney became a distant memory, freelance practice afforded me greater rewards. It allowed me the freedom to choose my own work hours, which I carefully balanced with my other interests and pursuits. Most importantly, it bought me time with my children. I watched their first steps, heard their first words, and relished their daily adventures.

Sara Mostafa and her children at a Montage coffee meeting

Sara further states that “The icing on the cake was that freelance practice with Montage did more than just ‘keep me in the game.’ Working as a generalized transactional attorney for law firms offering services in a wide array of practice areas afforded me the opportunity to develop expertise in areas of law that I had not previously practiced, as well as to refine my already existing capabilities.”

After her time as a freelance lawyer with Montage, Sara joined the prestigious boutique firm, Lobb & Cliff, and works full-time again with a practice that centers on corporate and business transactions.  We are thrilled for Sara, and know that she will be an asset to Lobb & Cliff. We are also happy to have had the opportunity to help keep Sara in the game, and helped her build her resume while she practiced law under an alternative model. We wish Sara the best of luck at Lobb & Cliff! To read Sara’s full article published in the Riverside Lawyer, please see Page 22 of the Riverside Lawyer Magazine.

Shawna began her legal career like many other elite law school graduates. Shawna was accepted to Harvard Law School in 1999, spent summers at prestigious firms, and clerked in the U.S. Tax Court. When she graduated from Harvard, Shawna accepted a coveted position in the tax group at Skadden, Arps, Slate, Meagher & Flom LLP in Washington, D.C. Shawna quickly decided that she had other life priorities, and made some major career and life changes to fulfill her dream becoming a foster parent. When Shawna realized that becoming a foster parent while working law firm associate hours was incompatible, she left Skadden to become a special education teacher in Baltimore. Shawna was then able to foster many children, and ultimately adopted siblings. Shawna then moved with her daughters back to California, where she got married and had a third child. Now in California and several years out of legal practice, Shawna wondered how she might restart her legal career. Luckily, Shawna’s friend and law school roommate, Angie Knarr, was already freelancing with Montage, and introduced Shawna to the concept. 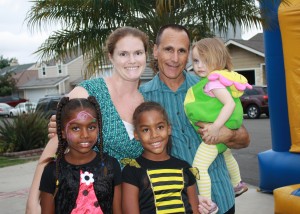 Shawna McKee and her family at the 2012 Montage Halloween party

Shawna explains, “I was looking for a way to ease back into a legal career since I was feeling more settled. My background is in tax law, but my life has led me more towards education law. Montage was a great way for me to transition back into law, and to make important connections towards the next steps in my career.”

Shawna’s next step turned out to be a position in the Education Law Group with Rutan & Tucker LLP, one of Orange County’s most prestigious law firms. While we are sad to see Shawna go, we are thrilled that she is following her interests with such an excellent firm. We wish Shawna much success and happiness!

The freelance attorneys in Montage Legal Group’s network come from impressive backgrounds, work on substantive legal projects through Montage, and many move back up the jungle gym to interesting and prestigious careers. Companies and law firms recognize that attorneys do not need to stay on a linear path, or climb a ladder within a single organization, in order to be an asset. Companies and firms have hired former Montage Legal Group attorneys in part because a freelance practice allows attorneys to gain new and different skills that are useful when returning to a company or law firm setting. Wouldn’t it be great if a former Montage freelance lawyer became the General Counsel for a Fortune-500 company, or the managing partner of an Am Law 100 law firm? We won’t be surprised when it happens.