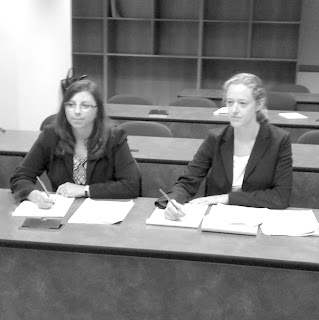 On August 3, Montage’s appellate attorneys, Kate Mayer Mangan and Heather Arambarri, served as justices in a moot court at California Western School of Law in San Diego.  The moot court was the final project for the school’s Appellate Advocacy class, a summer program for first year students.  In an effort to simulate the appellate court environment, the attorneys posed tough questions to the students throughout the presentations and challenged the students to make policy-based arguments to the panel.  Kate and Heather gave individualized feedback to the students, providing guidance on ways to improve the presentation and tailor it for the appellate court.

Kate and Heather were thoroughly impressed with the skill level demonstrated by the students.  At the end of the evening, both women commented that the students’ advocacy skills were so developed that it was difficult to believe the advocates were first year law students!

Heather Arambarri graduated from the University of Southern California, and obtained her J.D. from Loyola Law School.  Heather previously practiced appellate law for the California Attorney General’s Office, eventually leading and supervising a specialized team designed to work on writs and appeals.  Heather has argued many times before the Second and Fourth Districts of the California Court of Appeal, and the California Supreme Court.