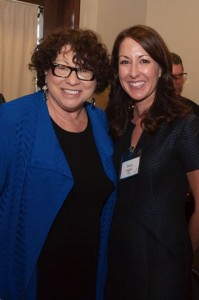 I had the pleasure and honor of meeting Supreme Court Justice Sonia Sotomayor on October 18, 2014 at the University of San Diego School of Law.  Meeting a Supreme Court Justice can be an intimidating experience.  After all, her opinions interpret United States laws, which impact our every day lives.  She is one of the most brilliant legal minds in history, so who wouldn’t be nervous?  Justice Sotomayor, perhaps familiar with being intimidating solely because of her position, seems to have perfected putting everyone at ease.  She was instantly warm, approachable, and witty.

During the program, Justice Sotomayor shared her journey to the Supreme Court, including the intense insecurity that the Justices feel when they are appointed to the bench.  She described her feelings as “imposter syndrome,” which means that she (and the other Justices) initially felt like they did not belong on the Court or that the President and Congress had made a mistake.  It does not seem to have taken long for Justice Sotomayor to settle into her position, which she does with brilliant grace.

The event was inspiring and personal.  I especially want to thank the University of San Diego School of Law and Dean Stephen Ferruolo for including me in this very special event.