Home Blog Uncategorized “It Was My Understanding There Would Be No Patent Law!” (OC Lawyer, May 2013) 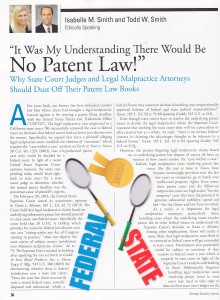 Isabelle M. Smith and Todd W. Smith recently published an article in the OC Lawyer titled “It Was My Understanding There Would Be No Patent Law!” The article discusses a new case, Gunn v. Minton, 185 L. Ed. 2d 72 (2013), in which the Supreme Court held that legal malpractice claims based on underlying substantive patent law should proceed in state court, not federal court.

Isabelle and Todd discuss the Gunn case, noting that the Supreme Court applied the 4-part test set forth in Grable & Sons Metal Products, Inc. v. Darue Eng’g & Mfg., 545 U.S. 308 (2005): “Does the state law claim necessarily raise a stated federal issue, actually disputed and substantial, which a federal forum may entertain without disturbing any congressionally approved balance of federal and state judicial responsibilities?”  In Gunn, the Supreme Court held that “the underlying federal patent issue is not substantial to the federal system.” The Court further determined that the underlying patent case has no bearing on patent law and would not set patent law precedent.

The article also discusses implications to practioners following the Gunn case – specifically that there is an increased likelihood that professional liability cases pending in federal court will be remanded to state court, that attorneys may face sanctions for attempting to remove professional liability cases to federal court even when the underlying case clearly presents federal issues, and that attorneys will need to educate state court judges on underlying federal issues. 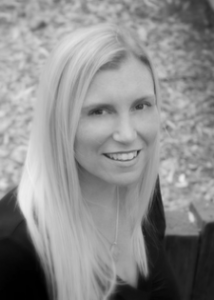 Isabelle Smith, formerly a partner with Howrey, LLP, joined Montage Legal Group as a freelance attorney in 2011. Isabelle obtained her law degree from University of California, Hastings in 1998 and served as the Executive Editor of the Hastings Law Journal.   She was a partner in the Global Litigation Group of Howrey,  specializing in complex business litigation, with a particular focus on professional liability disputes and securities matters.  Isabelle has represented and counseled law firms in legal malpractice disputes, and Fortune 500 companies and start-ups in securities class actions, derivative suits, corporate governance, antitrust, merger and acquisition disputes, unfair business practices, and trade secrets.   In 2006 and 2007, Isabelle was named a Southern California Super Lawyer Rising Star by Law & Politics Magazine.  She was also named Pro Bono Partner of the Year by Howrey, LLP’s Irvine office. Ms. Smith is a member of the OCBA Professionalism and Ethics Committee. She can be reached at [email protected]