As women founders of Montage Legal Group, we are always happy to hear about other women in the legal field who have created innovative companies that change the way people practice law.  Dorna Moini is a perfect example of a woman entrepreneur who has been recognized in the legal community for her tech company, Documate.  We sat down with Dorna to ask her about starting a company and her vision for the legal field.

We recently saw you on the list of “Fifty Female Founders in Legaltech.”  Can you provide us with a brief summary of your background before starting a company?

First of all, congratulations to Montage, too, on being on the list, and on your 10-year anniversary!  It’s exciting to see what an incredible community of lawyers you’ve built and the flexibility you afford them.

Personally, I went to law school wanting to work in human rights, but even my professors who had my dream careers working as prosecutors at the ICC and UN criminal tribunals told me that I should start by working for a big firm.  They said it would be the best training and launching pad for any career.  So, I did.  I worked at Sheppard Mullin and Sidley Austin for several years after graduating from law school.  And I would not have done it any differently.  I got lucky to manage large-scale litigation, learned how to lead a team of associates, and I went to trial several times a year.  And I probably would have stayed to make partner if not for the experiences I had in my pro bono work, which led me to start Documate.

Documate is a no-code document automation software. It allows anyone with frequently-used form documents or templates to create a docassemble document assembly workflow that generates those documents in a fraction of the time it would take to draft the documents from scratch.

Can you tell us a bit more about how it works?

So, users start by setting up their questions (like they would on Survey Monkey or Typeform). Then, they load their template documents, which can be court forms, PDFs, or custom Word documents.  Then, they connect the two and add logic jumps, conditions, signatures, and calculations.  These resulting app can be used for internal efficiency or, in the case of legal aid, to create workflows for the public or pro bono attorneys to help serve more people.

You mentioned you started Documate because of your pro bono work.  What led you to start it, and how are legal aid organizations using it now?

It took us (me and my technical co-founder) about 3 months to build that out, and that’s when we realized that we could help more people by building document automation software.  There are some tools like Abacus Next’s HotDocs and Thompson Reuters’ Contract Express, but they both require heavy technical knowledge to them set up.  We wanted to build something for the legal aid attorneys – so they could automate their expertise and publish a live web app without using any code.

What advice do you have for an attorney who is taking the plunge to starting her own company or law firm?

Don’t be afraid to go out and build what you’ve been dreaming of.  You will never regret having done it, and even if you fail (don’t think that way, but lawyers always think about risks), your law firm will always take you back. Building a business is a truly special experience, and you’ll love and cherish it like a baby.

And at the same time, condition yourself to be comfortable with uncertainty and rejection.  Do your research before you leave – into your market, how you’ll do sales, and how to build your niche.  But then, just get to work and be resilient. The beginning is hard. You’ll talk to 100 people so that one will say yes. But there will be a turning point where people are finding you instead of the other way around.

Where do you hope to see the legal industry in the next 10 years?

We’re going through a revolution in the delivery of legal services.  The middle class has been largely left out of accessing the legal system.  They can’t access legal aid, but they also definitely can’t afford the hourly rates of an average lawyer.  My hope is that technology can help close that justice gap in the next decade.  It’s also an opportunity for small and medium sized law firms to get involved and build tools that scale.  Companies like Hello Divorce have done amazing work in that arena – you can use their lawyers for full-scope representation, or you can use their DIY service to get quality form-preparation and a paralegal-assisted divorce.

What advice do you have for young female lawyers who are striving for more balance in their lives?

Do what’s right for you. There is so much messaging around “work/life balance.”  Should you work 9-5? Should you work 24/7 and get a nanny?  Should you stay at home and take care of your kids?  I don’t even have kids, and I’m exhausted hearing it.  Disregard all of that, and focus on what your gut and passion is telling you is right at this stage in your life.

Where can other lawyers contact you to hear more about your journey or ask for advice?

I love talking law and entrepreneurship.  Anyone who would like to chat or wants advice on taking the plunge into starting a practice or business can reach out to me at [email protected] or get on our live chat at www.documate.org. 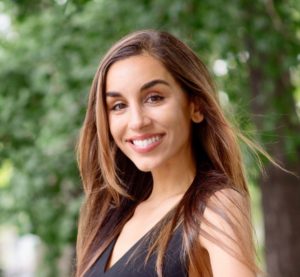 Dorna Moini is the founder of Documate, a software company empowering lawyers and professionals to bring their ideas to life without an engineering team.  In 2018, Documate launched a document automation and document assembly software platform, which has been widely used and praised by publications like Above the Law, Mashable, Law360, The Recorder, The National Jurist, and Law.com, among others.

After law school, Dorna joined Sheppard Mullin as an associate in the employment group.  She then joined Sidley Austin, where she was a managing associate through 2017. While there, Dorna defended companies in numerous class and collective actions and high-stakes discrimination, whistleblower and trade secret cases.  Dorna has tried cases to favorable verdict before juries, in arbitration, and in administrative hearings, and has successfully handled the subsequent appeals in state and federal court.