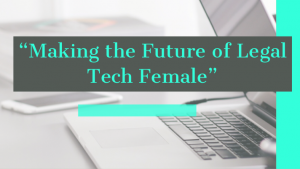 The legal profession was slow to accept women, and the percentage of women in law firm leadership positions remains low. Similarly, the tech space has been slow to accept women, perhaps stemming from historical issues of girls being discouraged to study the sciences.  But where there’s an artificial obstacle, there’s a woman on the job to shatter it.  Enter Kristen Sonday.

Kristen Sonday is a thought leader and well-known tech founder championing women in legal tech.  Kristen is the Co-Founder & COO of Paladin, a New York-based SaaS business that helps legal teams sign up for pro bono opportunities, enables coordinators to track the lawyers’ work, and captures some of the stories and impact that the lawyers are making through their pro bono work.  Along with Felicity Conrad, who was previously an associate at Skadden Arps, Kristen grew her tech company and received an investment from Shark Tank’s Mark Cuban, who stated “What impressed me about Paladin’s team is that they’re applying a business framework to an important social problem. With Paladin, lawyers can work on issues they’re passionate about and teams can leverage pro bono to build their businesses. It’s an important mission that I’m proud to be part of.”

Kristen created a list of the Top 50 Female Founders in Legal Tech, and recently wrote an article titled “Making the Future of Legal Tech Female: How We Can Promote Women Founders.”  We were honored to see that Kristen article’s mentioned Montage Legal Group! Heidi Alexander, the Deputy Director of Lawyers Concerned for Lawyers, discussed Montage as a solution for some women in the legal community:

Furthermore, because women are disproportionately affected by access to justice and workplace issues, they are also uniquely positioned to solve them. Take, for example, Montage Legal and MyVirtual.Lawyer. “Montage Legal was founded by two women (Erin Giglia and Laurie Gormican) who brought their own experiences as mothers,” says Heidi Alexander, the Deputy Director of Lawyers Concerned for Lawyers – Massachusetts and the head of the ABA’s Legal Technology Resource Center Women in Legal Tech awards. “Montage Legal provides freelance lawyer services by mothers at home on an hourly basis to provide flexibility. Another is Brooke Moore of MyVirtual.Lawyer, who has a network of lawyers, including a focus on military spouses who oftentimes have difficulties getting hired due to transitions in their husbands’ locations.

Women-run businesses are the real deal.  Women bring thought and depth to their companies, often addressing issues that have been previously ignored.  While Montage is not a legal tech company, we are female founders of a company that supports new ways to practice law, and are incredibly supportive of all female founders, especially those in the legal tech space.  Congrats to Kristen and Felicity on their success with Paladin, and to all the women founders of legal tech companies! To support these women’s companies, check out this list.